From Leelanau County’s establishment in 1863, Superintendents of the Poor were appointed to look after the county’s care of the poor. The State of Michigan statutes specified county charter legal requirements regarding their care. Administrative procedures were enacted to ensure that those who could not care for themselves came under the purview of the Superintendents of the Poor for their health and welfare. Although county charters did not require each county to maintain a poor farm or house, most Michigan counties did so.

From the earliest days, Leelanau County established a separate fund to cover financial emergencies. Then, in 1869 the County initiated an appropriation for poor relief that varied between $4000 and $5000 for many years. The recessions of the 1870s and 1890s provoked concern about the increasing demands for financial aid brought on by high unemployment. These conditions created more need for county residents willing to board the indigent than was available in these stark economic times.

Economic and social welfare issues were central to the Leelanau County Board of Supervisors’ decision to establish a poor farm to house those in need, and to allow them to participate in meaningful agriculture and domestic work. Further, it was believed this step would be more cost effective.

“. . . [Leelanau County] did purchase the Dr. Burke Farm on October 25, 1901 consisting of 120 acres of good soil one mile from Maple City on a main traveled road in Kasson Township for which we paid $2,400.00 . . . The buildings consist of two frame residences with stone foundations and cellars, one large barn with stone foundation and all the buildings well supplied with water, 70 acres of improved land and 22 acres of good timber all well fenced.”

The farm’s acreage is the current location of the Myles Kimmerly Park and of the Maple Valley Nursing Home. 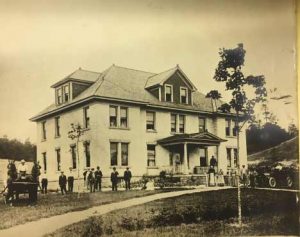 Within 7 years of purchasing the Burke farm, the Leelanau County Board of Supervisors decided not to repair one of the deteriorating frame residences and placed a resolution before the voters to build a new residence with a bond issue of $5000.00. It passed with a slim margin of nine votes, 542-533. Subsequently, appropriations were made to replace both residential buildings with one. Prominent Traverse City architect Jens C. Petersen was contracted to design the residence. It was well equipped for the times with indoor plumbing, tubs, and toilets, as well as heating and lighting plants. Upon completion, an inspection by the Board of Supervisors was planned for October 14, 1908.