Designed by architect Jens C. Petersen in 1911, this barn is a two-level 40’ by 60’ bank barn with a standing seam gambrel roof with flared eaves. It exemplifies dairy barns that stored hay in the upper level and livestock in the lower level.

The remaining original siding is one-inch thick by ten-inch-wide hemlock and pine boards with two-inch wide battens. The barn  was originally painted red as remnants remain under the eaves; at a later unknown date the barn was painted white. 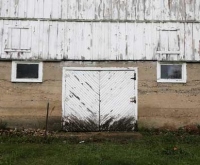 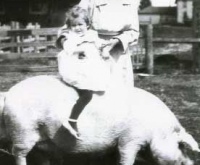 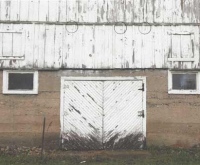 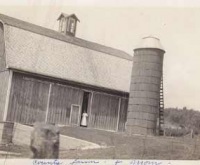 D
The foundation is hand-poured, unreinforced Portland concrete, one-foot thick and eight-feet tall. The original footings are also of unreinforced Portland concrete, two-feet wide and one-foot deep as was typical for stone barn foundations at the time. The concrete walls clearly show the imprint of the rough sawn wood board forms and the coarse irregular local gravel used in the concrete. [A]

Originally the barn had a shed roof along the west wall . [B] The upper shed roof rafters attached to the barn wall four feet above the upper floor shed rafter ends [C] , and the eave was supported by five posts with poured Portland concrete footings. The shed no longer exists. Early photographs also show a cupola at the center peak of the barn roof [D] . It was approximately eight feet tall, had a cross gable roof and a double hung window in each elevation; its location can be seen from the barn interior.

Caretaker Craker’s diary notes that a Saginaw wooden stave silo was built and installed by J.E. Welch in 1913. It had a metal gambrel-shaped roof and a pit that extended down to the lower-level floor for access to feed the cows. Some of the milking equipment remains in the lower level, but the silo was removed in the mid-1960s when farming was gradually discontinued. The barn has remained vacant since the mid-1960s; over the next ten years the residence and outbuildings were removed.

Over time surface water drained between the ramp and foundation wall, freezing over many seasonal cycles, seriously deteriorating the concrete wall, and pushing the east wall about 4 inches along the center of the length of the barn. This bowing of the east wall caused foundation cracks in the northeast and southwest corners. The upper floor east exterior has an earthen ramp with a deteriorating mortared stone retaining wall on the south. This stone wall covers an original concrete retaining wall.

Inside the barn a Shawver-type truss system supports the gambrel roof [E]. There are five trusses altogether; one at each end of the barn with three others spaced equally running transverse to the length of the barn. As of 2017, all were in good condition except that the bottoms of the three east-side middle trusses  [F] were rotted by water drainage to the point they were no longer attached.

The four spaces between the trusses are called bays. The center two bays have original flooring of two-inch thick by six-inch wide tongue and groove pine. The north bay floor has one-inch-thick boards and the south bay has two layers of one-inch-thick boards. Much of the flooring is in good condition. The original wood shingles are visible from the inside of the barn, under the standing seam metal roof.

The main entry to the upper level is from the east ramp through two large rolling doors [H]. The original door track and hanging rollers are still in operation but have received extensive repair work. There is a “person door” In the left side rolling door [I]. 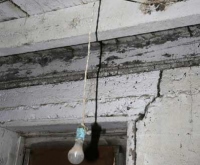 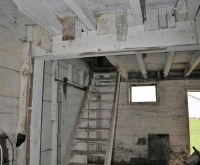 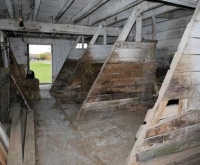 Four wooden stalls for workhorses are in the south end with built-in feed boxes and hooks on the wall for harness. The two-inch thick floorboards in the stalls are worn completely through in several places from the horses’ hooves [L].

Nine dairy stanchions are at the north side of the barn with concrete feeding trough and gutter. Near the east end of the feeding trough a silo doorway was cut through the concrete wall but has since been filled in for stability. There is evidence that automatic drinking cups were used. Much of the hardware has been removed but the remaining hardware is identified as from the James Manufacturing Company, a large barn equipment supplier.