Our first partnership was with Buckets of Rain (BoR) whose mission “grows hope and feeds lives – one garden at a time” fits with ours. In May 2018, a 5,000 square foot garden was established in the same location as the Poor Farm’s vegetable garden. It now has a number of raised beds, all of which were planted, watered, and weeded by volunteers. The first year of the Poor Farm/BoR garden yielded 3,000 pounds of produce, including 1,000 cucumbers – the largest number of any of the BoR gardens. Garden seedlings are grown in the student greenhouse at the Glen Lake Community School. The garden’s yield in 2020 was nearly two-and-one-half tons of kale, swiss chard, collard greens, beets, squash, peppers and tomatoes. The produce grown in both the Poor Farm and Mary Lee’s in Benzie County gardens is distributed locally to food pantries at Glen Lake Community Church, Leelanau Christian Neighbors, Goodwill Inn, and the Detroit area. In 2019, LCHPS established a perennial flower garden tended by LCHPS volunteers alongside the vegetable garden.

President of Bucket of Rain, Chris Skellenger and Treasurer, Mike Binsfeld have made some significant changes  and the “UP North” branch of this organization has been renamed to Row by Row.  The Glen Arbor Sun’s co-editor, Norm Wheeler, wrote an article about big changes for Buckets of Rain to Row by Row, which was posted on July 6, 2022.  Click on Chris’s name to learn more about Row by Row and other transitions for Chris Skellenger, 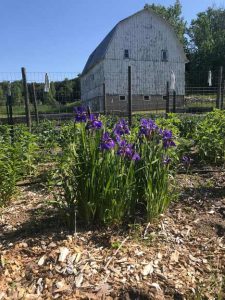 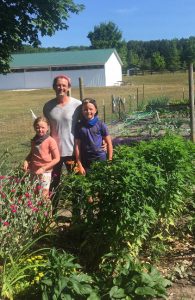